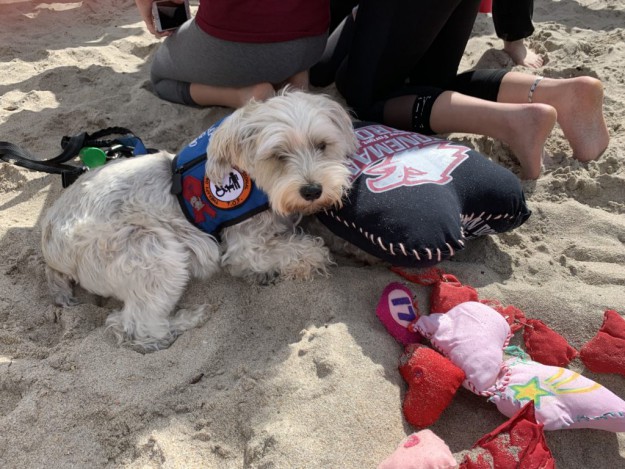 When Jill Cross was a sophomore at the University of Florida, she was badly injured in a motorcycle accident. Physicians managed to save her left leg, which was mangled below the knee, but after more than 10 surgeries, it was left almost one inch shorter than her other leg. The constant, uneven jolting from her stride over the decades since has resulted in many problems, including a fall that fractured vertebrae in her neck this past spring.

Add in a 2018 diagnosis of breast cancer. The illness required a double mastectomy and reconstruction — interrupted by her neck surgery — that’s still not complete. Today, Jill (who is 54) can’t even recall the number of procedures she has undergone. So it’s easy to think that the Boca Raton, Florida, resident trained her rescued Miniature Schnauzer, Astro (aged 10), to become her own service or therapy dog. Well, not quite.

Instead, she certified Astro through the South Florida-based arm of the national Share-A-Pet (SAPFL) program as one-half of a pet-assisted therapy team. Five years ago, he learned the basic commands, which include sit, stay, off, and controlled walking, among others. In addition, he figured out how to leave what Jill calls his “little dog” behaviors, such as barking at bigger dogs, at home. Together, Jill and Astro now visit assisted community living facilities, adopt an elementary classroom every year, and make hospice calls.

Perhaps most importantly, they provide support to the students at Marjory Stoneman Douglas High School. The site of one of the most notorious school shootings in America’s history, Parkland’s Stoneman Douglas is only 13 miles from Jill and Astro’s home.

Motivation to Help Others

A home healthcare nurse who has worked since 1988 with largely terminal patients, and the married mother of two adult children, Jill dips into a valuable emotional toolbox: patience, empathy, strength. Beyond that, she says she feels “a moral responsibility” to the community. “Everybody needs to do their part in the world,” she says. When Stoneman Douglas brought in a group of 20 therapy dogs following the shooting, Jill and Astro were more than ready to take part in the assignment.

Astro’s sensitive, perceptive, and calm disposition makes him an ideal therapy dog for the teenagers coping with the aftermath of the horrific shooting. The teachers also appreciate having the dog there. “You can feel the energy of the room change when we arrive,” Jill says.

At first, Astro and Jill followed one student who had a particular need. They would arrive at 7 a.m. and stay with him until 11:30 a.m., when the pair would be relieved by a second team. Astro would mostly snooze, Jill says, and simply be available for petting and cuddling. “I would sit and read a book for four hours. Shop online. Do needlepoint. My job was just to have Astro there. And that boy would touch Astro 25 times during a session — I would count,” Jill says.

The only time Astro would get restless, Jill says, was in reaction to loud noises, like thunder. But the student also reacted to abrupt and surprising sounds, such as fire drill alarms. So during class changes, when the bell would ring, Jill would tell the boy, “Here, hold Astro. He’s just as scared as you are.”

10-year-old Miniature Schnauzer Astro and his owner Jill Cross attend a Marjory Stoneman Douglass anniversary memorial on the beach. Astro is a therapy dog for the school. Photo by Jill Cross.

After this student received and started training his own dog, Astro became a generalist. Now he “works the crowd,” Jill says, joining two or three other dogs and their handlers at lunchtime in the courtyard. Jill always heads for students sitting off by themselves. “Not everybody comes to you,” she says. “Not everybody engages.” Naturally, those are the students who likely need attention from Astro the most. After Astro has absorbed the stress and other high-intensity emotions from traumatized kids, Jill gives them custom Astro stickers. Indeed, all the therapy dogs have their own personalized stickers, and some have business cards.

Sometimes they attend special ceremonies planned to honor the victims, such as this year’s beach yoga memorial session, held during the anniversary of the shooting. Other times, they head over to the Wellness Center, manned by social workers, a psychologist, and other therapy dogs. Students visit the center whenever they feel a need.

At the center, Jill says, the teens will sometimes talk to the dogs’ handlers about the shooting. “We never bring it up. It’s their demon. My demon is my physical inability to do things. This is theirs. But if they do mention it, I look at them and say, ‘I’m assuming that you’ve seen more in your life then you should have seen.’ Then I try to get them to chat about the future. It’s very hard for them. Every day they have to look at the chained-up building where it occurred. It’s a standing, living tomb. It’s a dichotomy. The school is fantastic about moving forward, but it’s still difficult.”

10-year-old Miniature Schnauzer Astro and his owner Jill Cross attend a Marjory Stoneman Douglass Aniversary Memorial on the beach. Astro is a therapy dog for the school. Photo by Jill Cross.

A Commitment to Helping the Community

Jill’s personal health experiences allow her to connect and relate on a fundamental level to the students at Stoneman Douglas, and guide Astro into doing the same. And despite the long recovery from her fractured neck — with six weeks to go until the 2019–2020 school year, she wasn’t even permitted to walk him yet — and the reconstruction surgery she still faces, she’s determined to return to Stoneman Douglas when the students do.

“I am not starting mid-year because of breast cancer or because I broke my neck,” she says. “I am starting in the fall. It helps them and it helps me. Of all things I miss doing — yes to boating, yes to Pilates — it’s taking Astro out in the community that I miss the most.”

No doubt, the community at Marjory Stoneman Douglas would miss Jill and Astro too.

For more information on the AKC Therapy Dog recognition program, check out the organizations (like Share-A-Pet) that we recognize.