It’s All Tricks Training: Preparing Your Puppy for Dog Agility 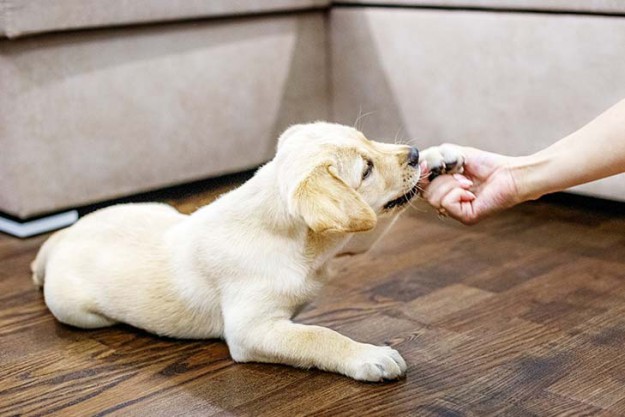 Through the tunnel, over the jumps, and around the weave poles – the canine obstacle course known as dog agility is fun to watch and even more fun to do. However, although both pure-bred and mixed breed dogs are welcome, they must be at least 15 months of age to compete. Should you wait until your dog is that age before introducing him to the sport? No way! Even young puppies can benefit from age-appropriate agility training and preparation. Read on for how you can get your pup ready to jump into dog agility.

Enjoy the Advantages of Prepping Your Puppy

As long as you choose agility prep activities that are appropriate for your puppy’s age, you and your dog will reap the benefits. Program manager of the AKC GoodDog! Helpline and longtime agility competitor, Penny Leigh, believes, “It is really a huge advantage to introduce puppies to foundation exercises and low-level equipment. By the time they are mature enough to try the full-height obstacles, they are like, ‘This is no big deal. I already know this!’”

Carrie DeYoung, Director of Agility for the American Kennel Club, agrees that there are many benefits to early agility training. “These behaviors quickly transfer when puppies are old enough to work on real equipment. Plus, you will have built a bond and taught them how to learn. If you do that you can teach them anything! And they are excited to try whatever you ask.”

Participating in agility boosts a dog’s confidence, and that’s particularly important for young puppies. A large component of socializing a puppy is helping him become comfortable with everything the world has to offer. Leigh says agility training can help. “When a puppy conquers a tunnel or walks across a low board, it boosts confidence, so the puppy thinks, ‘Wow, I did that!’”

She also recommends owners avoid telling their puppy “no.” Instead, reward the positive behaviors you want and ignore the negative ones you don’t. “For hesitant puppies, take things slowly, never force them to do anything that they are afraid of, and use a lot of positive reinforcement to encourage them.” 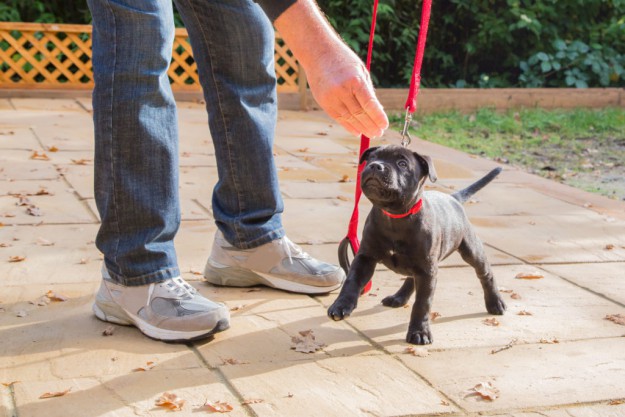 Of course, all this self-confidence will be a boost on the agility field as your dog will need to run the course off-leash and use independent skills to succeed. One of those skills is self-control. Leigh explains that the super-fast, charged up dogs racing across the agility course in mere seconds may not seem to have self-control. “But they do have control – start-line stays, the ability to complete all the weave poles and hit all the contact zones. This takes a lot of self-control when the dog is also running at top speed.”

Teaching any puppy self-control is a great idea, and for future agility pups, it’s essential. One of the first impulse-control drills Leigh teaches her own puppies is what she calls the slow treats exercise. She trains the puppy to wait for permission before taking things. “I want them to learn that they cannot just snatch a treat out of my hand – they wait until I release them to take it. I then move this exercise to toys so they can work with me even if a toy is on the ground near them – until I release them to the toy.”

Another good impulse-control exercise is teaching your puppy to go to his bed or mat to rest or relax until he is released. This is a great behavior to take on the road to classes or competitions later. Leigh also recommends crate games, “where puppies learn to love going in their crates and not to bolt out of their crates as soon as the door is opened.”

Introducing any puppy to new surfaces is an important part of socialization, but for the agility dog to-be, it’s critical. Leigh explains, “they will be executing teeters that move and bang, as well as running across dog walks, through tunnels that may have a strange feel to their feet and lying down on a table that can have various surfaces.”

Preparing your puppy for these obstacles is easy. For example, put crinkly tarps on the ground and encourage your puppy to walk then run across them. Teach him to climb different types of stairs (wooden, carpeted, open-backed) and walk across various floors including slick and slippery ones. Always introduce your puppy to these new surfaces slowly and use lots of positive reinforcement and high-value treats. Leigh advises, “If your puppy balks, never force the issue. Go back and start very slow, perhaps with your puppy just smelling the surface, then touching with one paw, and so forth.”

Don’t forget about moving surfaces too. Although you can work up to a wobble board (a piece of plywood, at least two-foot square, with something small underneath like a tennis ball to make it unstable), you can start simpler. DeYoung suggests teaching your puppy to put his front paws up on something like a stockpot. (Later you can add a ball underneath to teach him to get used to movement.) She also adds a cue to the behavior. “With this I teach the word ‘feet’ so now my boy will put his feet up on anything if I point it out and say ‘feet’ – makes for some fun pictures!” 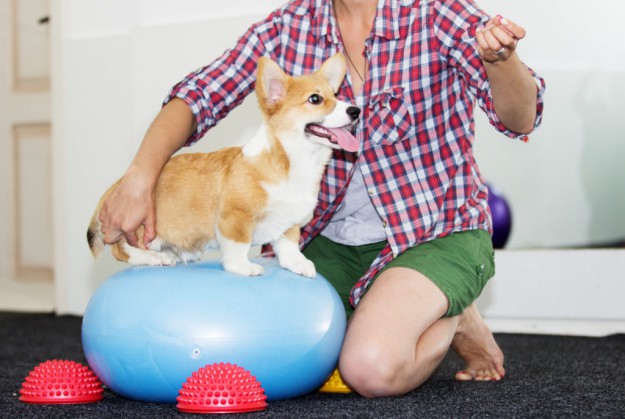 Future agility dogs need to know basic obedience behaviors like sit, down, and stay. These are particularly valuable for the start line and pause table. But there are some other basics to consider too. For example, DeYoung suggests playing recall games (try round-robin recalls where several people stand in a circle and take turns calling the dog) or using restrained recalls (where one person holds the dog while you run away and ask him to come).

Teaching directional cues like right and left is another useful foundation behavior. As is the follow-me game where you encourage your dog to stick to your side no matter where or how fast you walk (teach for both your right and left sides). De Young also recommends training your puppy to move out away from you and circle around an object like a cone before returning.

Leigh suggests teaching your puppy to nose target (sticking their nose on a particular location), both on your open hand and on a physical target like a clear piece of plastic. Targeting allows you to position your puppy by placing the target where you want, such as in the contact zone at the end of an obstacle. Or you can move your puppy by moving the target such as teaching him to spin in a circle by circling your hand. She also plays a lot of motivational games like tug-of-war with her puppies. “I like to get my puppies tugging on a toy and then teach them to release the toy to me, which results in them immediately getting the toy back to play.”

According to Leigh, “Agility is really just a series of tricks. So, introducing trick training to puppies is a great way to start building an agility foundation, plus it develops confidence and is fun for the puppy and the owner.” She starts with tricks like spin in a circle (which is also how she introduces right and left), weave through her legs, and sit pretty (although not for an extended time in puppies). She also teaches back up because it’s an excellent way to develop rear-end awareness – an important agility skill when traveling across obstacles like the dog walk at high speed.

DeYoung agrees. She believes that tricks aren’t only fun, they can also be taught quickly and used as stress relievers and a way to gain your dog’s focus when he’s old enough to compete. Additionally, she advises, “Get your puppy out into new environments and have him practice the tricks you are teaching. Home improvement and pet stores are great for this as well as the homes and yards of family and friends.” But be careful you don’t let strangers or unknown dogs overwhelm your puppy. The point is to teach him to want to learn and to enjoy being with you.

Enroll in a Puppy Agility Class

There is so much to learn before your dog hits the 15-month mark, so why not get the help of a professional. Many training facilities offer agility classes tailored to puppies. Leigh recommends them along with puppy kindergarten classes. “I would just make sure that the class is using foundation equipment (wobble boards, low walk planks, tunnels) and other equipment that is small and puppy-size and that it concentrates on flat-work and focus exercises.”

DeYoung agrees that the class should be all about groundwork and games. “They should not be weaving, jumping, or working full-size equipment. So much training can be done with one jump without a jump bar or just two weave poles (or cones) to teach them to run through in the same direction they will enter weave poles.”

DeYoung suggests you can start preparing your puppy for agility as soon as you bring him home. Puppies learn incredibly quickly, and it’s fun to watch them pick up new things. Just be sure to put safety first. If you have any concerns about what your puppy can handle, speak to your veterinarian.

Leigh’s motto is to keep it low and slow. She explains, “Puppies’ growth plates are still open, so it is crucial that they don’t jump full height or climb on full-height contacts and do closed weaves before they are mature. You want your dog’s career to last as long as possible and that means keeping them physically safe and sound.”

Feeling inspired to sign your puppy up for an agility class yet? At the very least, we know you’re itching to watch! The exciting sport of canine agility owes its heritage to the equestrian world. Now, for the first time, AKC teams up with the presenters of the Longines Masters horse show to bring the AKC Agility Premier Cup presented by EEM to Nassau Veterans Memorial Coliseum on Thursday, April 25. Get tickets to see America’s best canine athletes jump, weave, and race for top honors at this premier event. Kids 14 and under are admitted free.